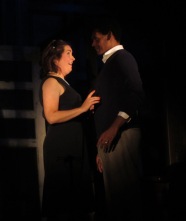 The inaugural stage-work of the Artsong Repertory Theater Company Dial L For Liebeslieder is a satirical nod to the 1954 Hitchcock film Dial M For Murder.  The Liebeslieder Waltzes by Johannes Brahms are tantalizingly brought to life using the highly stylized world of old Hollywood glamour and the mystique of classic film noir. Singers sing, pianists piano, poisoners poison and archetypal characters like the mysterious femme fatale and the brooding anti-hero tell the love story featured in Georg Friedrich Daumer’s 19th century German poetry.

Gloria is thrown into a whirlwind, tobacco-filled fantasy when she is faced with a challenge to go one minute whithout lighting up. She is whisked away to the Moulin Rouge, an Italian movie set, a russian war table and a wild west bar room in a puff of smoke that leads to a personal epiphany. Songs by Bizet, Shostakovitch, Respighi, Larsen, Copland and Schubert give dimension to these imaginitive settings within the 10-minute play by Alex Broun.

Do memories make a person? Susanna replays memories of interactions with her mother, Rose, as she examines their changing relationship in the face of Alzheimer’s Disease. Re-living the unexpected challenges that have turned their world upside-down, Susanna discovers a fine line between laughter and tears, real and percieved fears, and her capacity to bend or break under the strain of communication breakdowns. Rose’s shifting reality leaves much of the world around her unrecognizable. Together they search for what remains when everything they know about each other is lost. The concept is built around duets from Jake Heggie’s song cycle Facing Forward/ Looking Back, with songs by American composers including Charles Ives, Tom Cipullo, William Bolcom, Lori Laitman, Dominick Argento and Larry Alan Smith. 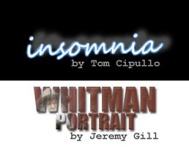 This was no everyday art song premiere. We are put the ARTCy stamp on two fantastic new works by composers Tom Cipullo (winner of the 2012 Guggenheim fellowship) and Philadelphia-favorite, acclaimed composer Jeremy Gill. Both pieces are song cycles written for several singers and piano that explore our interconnectedness through poetry, music and time. Cipullo’s Insomnia is set around a night-time tableau narrated by the texts of varied poets. The neon and lamplight-tinged feelings that emerge in the hour…s of a sleepless night tell stories: a man listening to the sounds of his home as if it were alive, a virgin dares to dream of a lover, a hilarious ode to snoring. Gill’s Whitman portrait uses the humanist poet Walt Whitman’s own words alongside brilliantly crafted music to paint a picture of the self-scrutinizing man through his private thoughts, obsessions, expressions of eroticism and existential meditations.

What is an art song?

An art song is a vocal music composition set to poetry, usually for voice and piano, that is not part of a larger work.

Want to know what we’re doing next? Sign-up to receive our event emails!